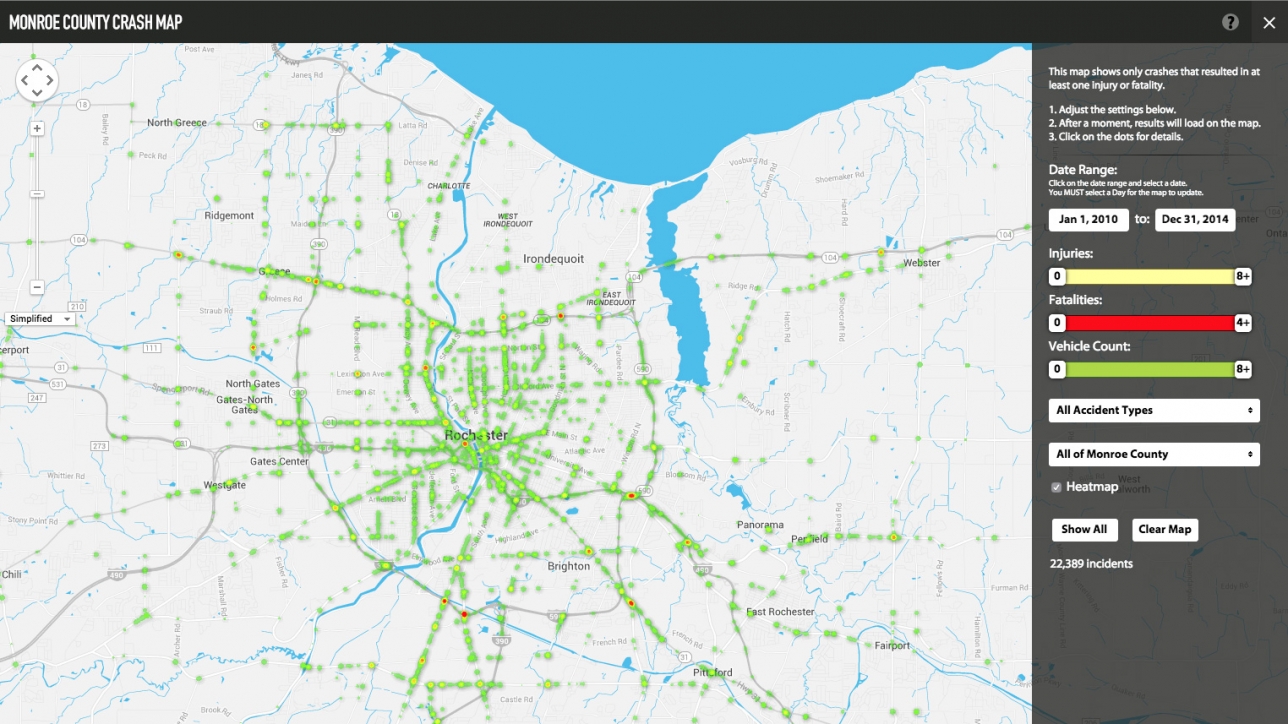 Q: Who Made This?

“We live in a time of unprecedented connectivity, capturing data faster than we can draw meaning from it. It’s important that we take time to reflect on the big picture and reconnect the dots. Our personal and professional behavior is often influenced by visualized data. Community wellness correlates to our access to and understanding of unbiased information. The Crash Map project was developed pro bono for those who share our proactive, data-centric approach to decision making.”

See the Monroe County Crash Map and learn why we made it: http://t.co/nQ8fs1BiZi #ROC pic.twitter.com/33or2vyRLQ

An accident is an event that happens by chance or that is without apparent or deliberate cause. A crash is a vehicular collision with an obstacle or another vehicle.

A collision is a near-miss. Try to pay attention to the language we all agreed on. – George Carlin.

Q: What is Data Journalism?

Some people say that the state of American journalism is at an all time low, ruined by dumbed-down infographics and click-bait headlines. There is a strong counterargument to be made which is visualized data and data journalism are rapidly improving, making us smarter about the world we live in. Pulitzer-prize winning journalist, David Leonhardt of the New York Times gets it:

“American Journalism is better today than it has even been… …It’s more fun to practice and more fun to read.”

The reason we can be excited about Journalism today more than ever is our deeper understanding and engagement with visualized data.

Right now data about the public is owned by the hands that collect it (Google, Monroe County, NYDOT, etc). It’s up to the data journalists to request it and analyze it.

The Reconnect Rochester Crash Map also helps disrupt the idea that maps are only used as a static element of a written story on crashes. An interactive map can live on its own and allow people to interact and derive their own data-driven stories. Leonhardt admits he struggles with the programatic aspect and relies on web developers and user experience designers to assist him with things like interactive maps. We see a future where journalists and digital designers/devs work together as a team to produce hyper-local data-driven content. If that sounds valuable but technically out of reach, get in touch and we can collaborate.

Q: What technologies and tools were used?
Q: Can/Will this be modified and updated?

Although the map development donation is not open-ended and ongoing, Livadas Consulting would work with the community to enhance the map. The Reconnect Rochester Crash Map is open-source, and the data and code repository is available.

Q: Is There a Feature Wishlist?